A Life, Redefined Review by B. Lynn Goodwin 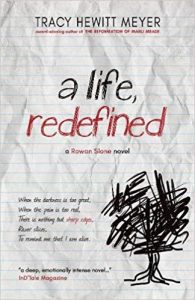 How can anyone redefine who she or he is? As adults we know we can change ourselves but we can’t change anyone else. For teens the boundaries are not so clear. In Tracy Hewitt Meyer’s dramatic YA, A Life, Redefined, Rowan Sloan is a teenager is trapped. Everyone holds her responsible for the death of her baby brother. Although she was only ten, she was the oldest and took care of her baby brother when her mother couldn’t. After she fed and rocked him and put him to bed, she covered the lower part of his body with a blanket. In the morning he was dead. Her whole family turned on her.

Seven years later, after fighting the guilt imposed by her loveless sister, her obese, depressed mother, and her often-violent father, she wants to free herself. College would be the way out. With encouragement from a boy she’s had a crush on and a secret her Grandmother finally spills, she finds the power to redefine herself. Rowan is reborn. In Meyer’s skilled hands A Life Redefined helps teens look at their lives, surroundings, and choices, and either appreciate their lives or find ways to overcome what is beyond their control.

I love the emotional honesty of YA stories. In A Life, Redefined it’s all about the heroine overcoming obstacles that look insurmountable. Though some moments might be improbably, I read right through them to learn how things turned out. By the end of the story, Rowan finds strategies to make her life work, learning from mistakes, making wise choices, and finding the love that her family could never give her. The teen world is complex and filled with highs and lows. Meyers digs into them fearlessly, creating imagery and a story for teens and adults alike. Read it for yourself and see how much you root for Rowan.